Solitaire: Decked Out Ad Free is the best version of Patience/Klondike card game ever made

Solitaire is a game which every Windows user will probably be aware of and remember with a smile. The classic card game popularised in Microsoft’s OS since the 90’s has a worldwide fan base. But when it comes to mobile versions of Solitaire, there are not many good choices out there.

Most Solitaire games on Google Play either have ad-banners or In-App purchases or come in a premium version. Even the paid ones are not well designed, and have rather small cards or a dated UI. But there is a new card game available on the Play Store, which negates all of these problems.  Isn’t this nice? It certainly is, but it also highlights just how bad mobile gaming has become, with almost every free game being riddled with IAPs, ad banners, video ads, autoplaying ads, energy bars, virtual currency and other rubbish. These ads not only eat your data, but also slow your device and drain your battery.

Meet Solitaire: Decked Out Ad Free, and the name so obviously suggests, the game is ad-free, but what is more important, is that the game itself is completely free. There is an optional IAP to buy coins for unlocking deck backgrounds, but you can unlock them for free simply by playing the game and earning coins.

The developer’s of Solitaire: Decked Out themselves explain why they made the game free and ad-free in the game’s description on the Play Store. Now, coming to the game, Solitaire: Decked Out has incredibly cute graphics, and a modern UI. The cards are very well designed, and fit the screen quite well, and don’t make you squint. The game supports landscape and portrait gameplay, which you can toggle from the settings.
1 of 7
- +

The game has auto complete, unlimited undo, hints, and show the time of the game, and how many moves you played in a game. There is a left hand mode for you southpaws out there.  And the game can be played offline too. Honestly there is no reason, not to try it at all. You can earn coins for free, and unlock one lucky box for 200 coins. Doing so, will unlock a new background or some animation effect which is played when you win a game.
Download Solitaire: Decked Out for free from Google Play 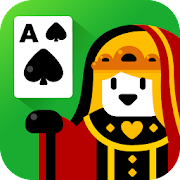 There are a lot of achievements and accomplishing one, will give you a bunch of coins.

If you are a fan of the card game called Patience (as it is known in India), you must play Solitaire: Decked Out. It even has a three card mode, which is more challenging than the one card mode. You can toggle this from the settings as well.
Tags: SolitaireSolitaire Decked Out
For latest Android News & reviews, follow AndroidPure on Twitter, Facebook, and Subscribe to our YouTube channel. Want any help with your Android Smartphone or Gadgets, Ask your Questions at Androidpure Forum.
Previous Post

Xiaomi Mi Note 2, Mi 5S and Mi Mix will not be launched in India

Oppo Reno4 and Reno4 Pro with 5G announced in China