The OnePlus Nord launch date has officially been confirmed by the company. The upcoming mid-range device will debut two weeks from now.

Here’s what we know about the device so far.

The OnePlus Nord will be powered by a Qualcomm Snapdragon 765G chipset and will support 5G mobile networks. The device is said to sport a 6.55-inches Super AMOLED Display with a 90Hz Refresh Rate, an In-Display Fingerprint Scanner. The phone has 6GB RAM, 128GB storage, and will be backed by a 4,300 mAh battery that supports 30W Fast Charging. The device has a 16MP selfie lens embedded in a punch-hole on the screen.

The main cameras on the Nord will feature a 64MP lens, a 16MP lens, and a 2MP camera. Carl Pei, the CEO of the company has retweeted a post that mentions that the OnePlus Nord will support Optical Image Stabilization (OIS). He also added that the mid-range phone will have a flagship camera. 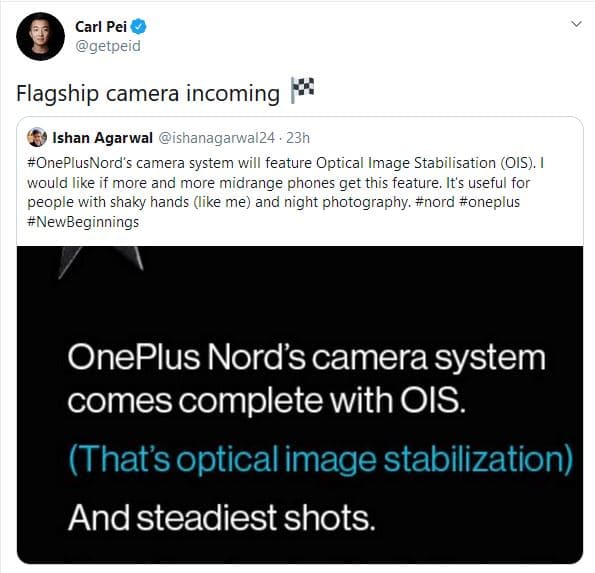 The OnePlus Nord is expected to be priced at about Rs. 24,990 in India, according to a survey that was leaked earlier. And the company’s founder, Pete Lau, confirmed that the price will be below $500.

The OnePlus Nord launch date has been scheduled for July 21st. A microsite for the device is up on the company’s India website. Here’s a video teaser from the company that confirms the same.