LG V20 is the successor of LG V10 launched last year in October and is expected to continue with its premium or flagship like features in addition to recently launched LG G5 flagship. It is scheduled to be officially launched on Tuesday, September 6 and the company has been successful in keeping it under wraps. We have hardly seen any major leaks around LG V20, except one or two device images and some case renders confirming dual camera. The company though has teased some of its features such as V20 will be the first smartphone to come with Google’s latest mobile Android operating system i.e. Android 7.0 Nougat.Similarly, we know that the V20 is equipped with a 32-bit Hi-Fi Quad DAC i.e. digital to analog converter chip for crisper, clearer sound with decreases ambient noise. 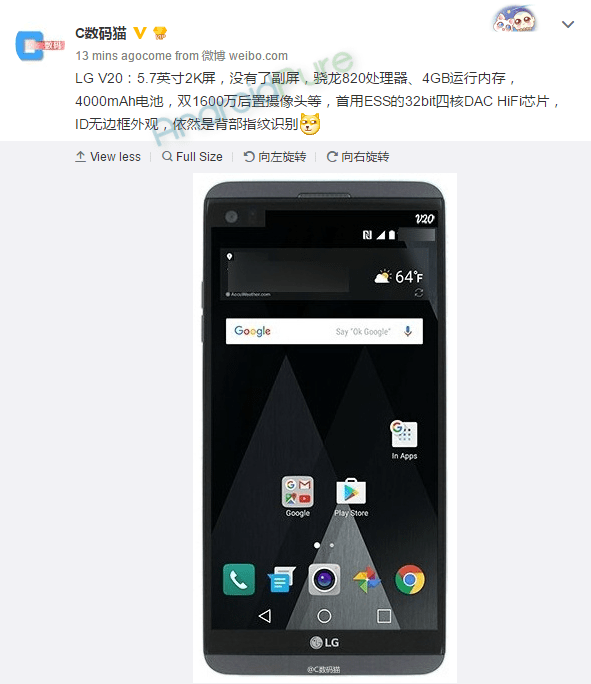 Today, Androidpure spotted a new leak/rumor on Weibo which if true reveal the major hardware specifications of V20. Going by the rumor, LG V20 sports a 5.7 inch 2K display and is powered by Qualcomm Snapdragon 820 with 4 GB of RAM. In terms of camera, it sports a 16 MP dual camera at the back and is backed by a battery of 4,000 mAh capacity.  The fingerprint sensor is located on the back as there is no home button on the device as is the case with many other smartphones.

Take this leak with a pinch of salt as we are not sure of how genuine this rumor is. The V20 launch is just a day away and we will know the full details of V20 including the hardware specifications of the device soon. Stay tuned at Androidpure and we will keep you updated.

OnePlus to merge OxygenOS and HydrogenOS for faster updates