It was only yestterday that we saw some leaked images of the LG V20, sitting inside a rugged armour case. And now, a new image of the upcoming phone’s front panel has been leaked by renown leakster Evan Blass. 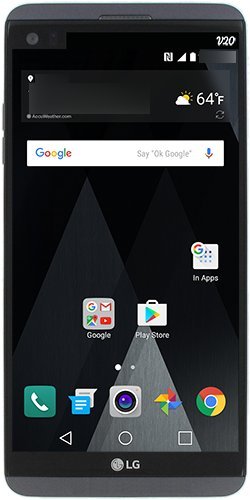 The photo does match with the previous leak, and gives a better look at the ticker display, which of course is the highlight of the V20, as was the case with its predecessor the LG V10.

There is a rather curios folder with a Google icon, and is named “In Apps”, on the homescreen. The presence of a separate Google folder with Google Search, Gmail, Google Maps and YouTube, along with icons for Google’s Messaging, Photos and Chrome apps on the dock intrigues us.

Google had recently announced during the launch of Android 7.0 Nougat, that the LG V20 will be the first device to run the new operating system out of the box, even before this year’s Nexus devices are launched. This is a first in the history of Android. So, is “In Apps” a partnership between LG and Google? Are there special apps from the Mountain View company on the phone? Only time will answer those questions.

Now back to the leaked photo, we can clearly see that it has some darkened portions, which we think would have given away the details of the person who leaked the phone, which in turn suggests this is not an official render, but a real world picture.

The LG V20 is set to be launched on September 6th.