Halfbrick Studios, the Australian game developer behind the hit games, Fruit Ninja and Jetpack Joyride, has unleashed a new action platformer called, Dan The Man, on Google Play. The game was actually soft launched recently, which is why you will see the 50,000+ downloads for the game. 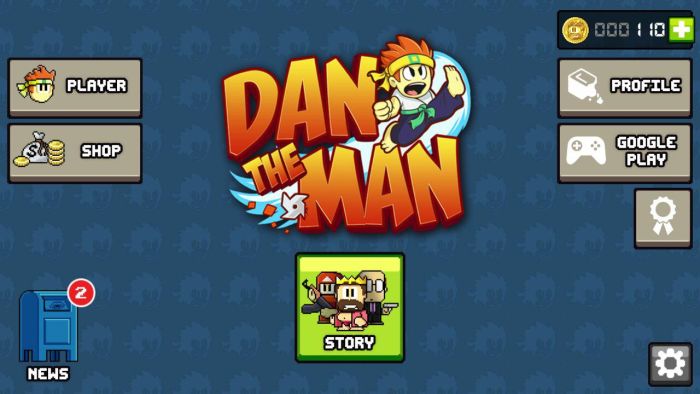 Don;t let the name fool you, you can play as either Dan or Josie, and even as the legendary Barry Steakfries, although he doesn’t come cheap.

Yes the game does have IAPs for a lot of extra content, and unfortunately Barry is behind the paywall along with other characters like Lincoln, a Knight, a Pirate, and even a Dinosaur (Age of Zombies anyone?).

But you can get one character for free, by tapping on the “News” option in the main menu of  Dan The Man. This will let you claim your pre-registration bonus, and it actually works even if you didn’t register for it. We got the villager costume for free using that, and the ability to create custom characters. And based on this, we think, the reward will be the same for everyone.

You can pick your own shirt, pants, gloves and shoes too. Each of these grant a special bonus, which gives the game an RPG-ish flavour.

Now, coming to the gameplay, Dan The Man plays similar to retro platformers, with a Mario-esque setting. You can move right, left, jump, punch (and kick) combo, and use weapons. You can upgrade your attack moves from the Shop in the main menu.

There are some secret areas, in the game, which aren’t exactly super hidden. These usually have some coins, and a weapon. Speaking of which, the game features Shurikens (Ninja throwing stars), Daggers, Guns and more.

Watch out for the enemies who also have similar weapons. We found the armoured gun toting enemies a bit funny, but they pack quite the punch as the sword wielding baddies, who have a surprisingly realistic long range of attack.

Don’t waste the coins which you get from smashing vases and enemies in the in-game store.

Save the coins for upgrades which you can buy from the main menu. You can save your progress by walking past the checkpoint (floppy disk on a board), which will change to your charcater’s avatar to indicate the game has been saved. Finding yourself low on health ? Look for the apples, which restore your life bar.

Download Dan The Man for free from Google Play:

The game features boss fights as well as a Battle Mode, and daily events with special rewards. Though the controls are tight, the game does support gamepads as well. If you wanted your own Chuck Norris beat-em-up game, look no further. Dan The Man complete with a bandana, scratches that itch.

[Editorial] Is the Pixel phone an iPhone competitor?

Carmageddon goes free on Android, with ads and IAPs