Samsung has begun rolling out the Android 10 Update for Galaxy A70s, Galaxy A70 and Galaxy A6 2018. The company had rolled out the update for the Galaxy M40 in India earlier this week, 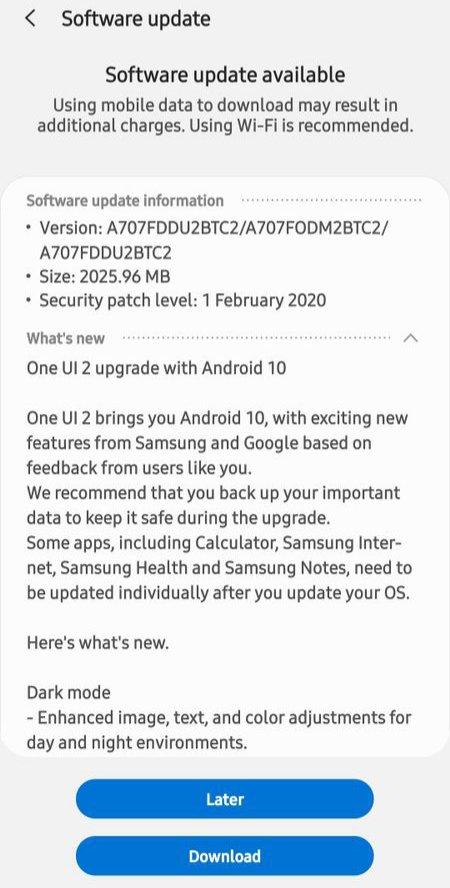 The Official Roadmap had revealed that the Android 10 Update for Galaxy A70 and Galaxy A70s were originally scheduled to be released in April, so the early release comes as a nice surprise for users. Let’s look at the details of the new software.

The Android 10 Update for the Galaxy A70s and Galaxy A70 is rolling out in Ukraine and India respectively. It brings One UI 2.0, and all of its features to the devices.

Realme UI based Android 10 Update for Realme 5, Realme 5i and Realme 5s rolls out

If you haven’t received the update yet, you can check for it manually by navigating to the Settings > Software Update > Download and Install.

PiunikaWeb reports that the Android 10 Update for Galaxy A6 2018 has been released in France. The version number for the firmware is A600FNXXU5CTB9, and is about 3.5GB in size.

Details about the release notes for the update remain unclear, though it is believed that it brings One UI 2.0 to the Galaxy A6 2018.

Samsung had released the Android 10 update for Galaxy A30 and Galaxy A50s last month, and for the Galaxy M20 and Galaxy M30 in December 2019.