While the tweet may appear like a leak, it is probably a sponsored campaign ahead of the phone’s launch. That isn’t surprising considering that Samsung has collaborated with many Youtubers for various launches including the Galaxy M series last year. 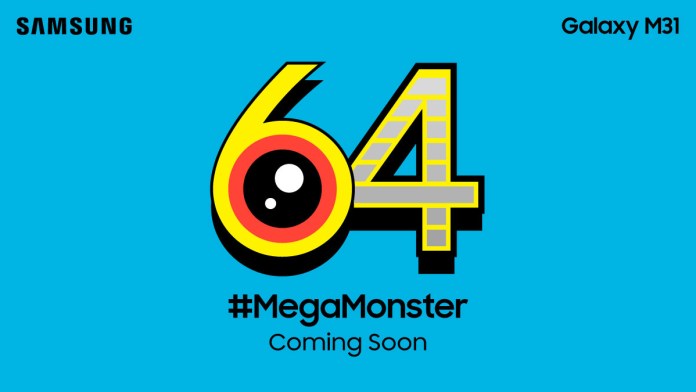 And it coincides with fellow YouTuber Geeky Ranjit‘s message that mentions 64MP, indicating that the upcoming mid-ranger will be equipped with a 64MP primary camera. This is likely the ISOCELL GW1 sensor that we have seen in many devices.

NDTV observes that the Mega Monster tagline could mean that the device could feature a big battery like its predecessor, the Galaxy M30’s 5000mAh battery. According to a listing on Geekbench, the Galaxy M31 could be powered by an Exynos 9611 processor with 6GB of RAM, and has the model number SM-M315F/DS.

Samsung struck gold with the M series and caused quite a stir in the mid-range segment that was long been dominated by Xiaomi’s Redmi line-up and new rival Realme’s competitive offerings. The M-series were so well-received by users in India, that the company treated the phones like a flagship and updated them to Android 10 with One UI 2.0 quite quickly.

We don’t have any concrete information about the Samsung Galaxy M31 launch date yet, but considering that it is being promoted on social media, we can expect it to happen soon. The company is also said to be prepping the announcement of the Galaxy M11, M21 and M41, to cover the various budgets in the smartphone market.