Realme has announced a new entry level phone called the Realme C11, in India. The device had been launched in Malaysia last month. 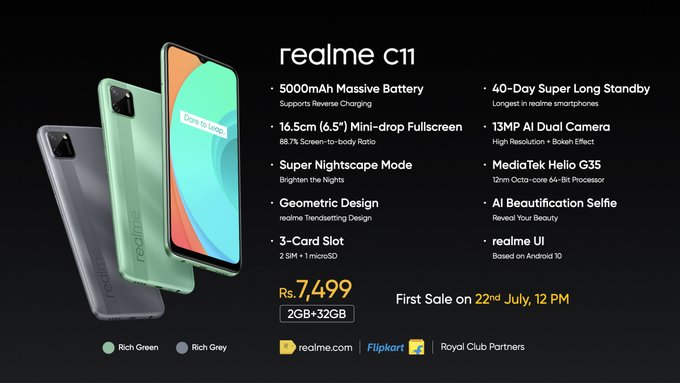 The C11 sports a 6.5-inch HD+ LCD screen that has a 20:9 aspect ratio and 88.7% screen-to-body ratio, The display has a water-drop notch for the 5MP selfie camera that has an f/2.4 aperture. The Realme C11 runs on Realme UI based on Android 10, and is powered by an octa-core MediaTek Helio G35 processor.

The phone has 2GB of RAM and 32GB of storage. The Realme C11 has a dedicated microSD card slot which is part of a triple card tray, so you can use it alongside Dual SIMs.

A square camera bump in the top left corner of the back panel is home to dual cameras on the Realm3 C11, the setup comprises a 13MP primary lens with an f/2.2 aperture and a 2MP secondary sensor that has an f/2.4 aperture, along with an LED Flash.

The Realme C11 has been priced at Rs. 7,499 in India. It will be available from Flipkart and Realme.in on July 22nd.