Poco Italy has shared a teaser image that confirms the Poco F2 Pro launch date. The next gen flagship phone is all set to arrive next week. 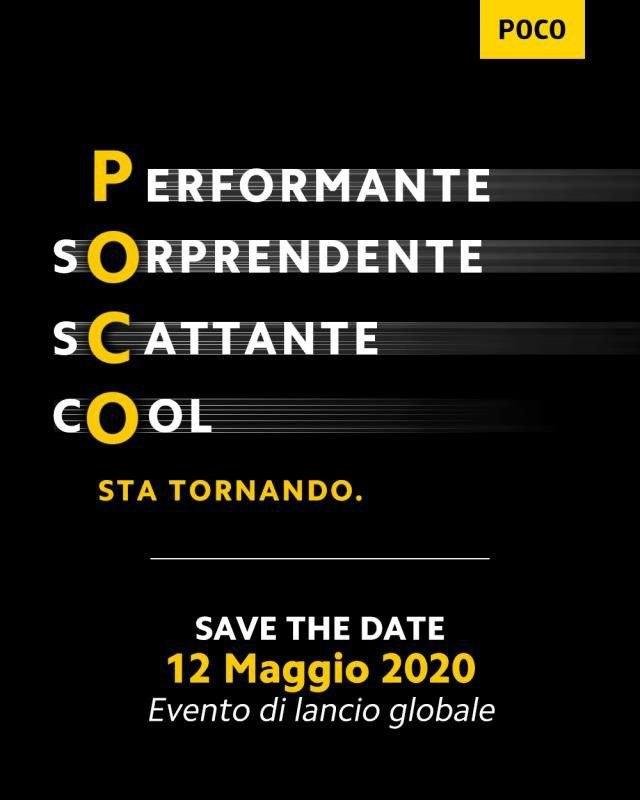 The teaser image is in Italian and loosely translates to “Performance, Surprising, Whippy (Fast), Cool”. The phrase below the word Poco says “it is returning”. This is a clear indication that the phone is the Poco F1’s successor. The Poco F2 Pro launch date has been set for May 12th. The device will be announced globally via a live stream.

Yesterday we reported that the Poco F2 Pro had been listed on Gearbest. The phone will sport a true full screen design without a notch or a punch hole camera. It is likely equipped with a pop-up selfie camera akin to the Redmi K20.

The Poco F2 Pro could sport an in-display fingerprint scanner, and will be powered by a Qualcomm Snapdragon 865 processor with 6 or 8GB of memory and 64GB of storage. The device is expected to be packed with a big battery, and has a round camera bump like the Poco X2.

The Poco F2 Pro launch date isn’t the only one that has been confirmed.  Xiaomi is also set to announce the Mi 10 in India on May 8th. The Redmi Note 9 could be announced soon, as will another phone, reportedly called the Poco M2 Pro. That’s quite a few launches in a short time.

Realme Narzo 10 series to launch on May 11th in India