HONOR 20 series to launch in India on June 11

Honor 20 series is set to officially launch in London next week on May 21 where two flagship device Honor 20 & Honor 20 Pro are expected to be unveiled. Honor has just confirmed the launch date of Honor 20 series in India which will happen next Month on June 11. We have received a “Save the Date” Media Invite for the launch event in India confirming the details. 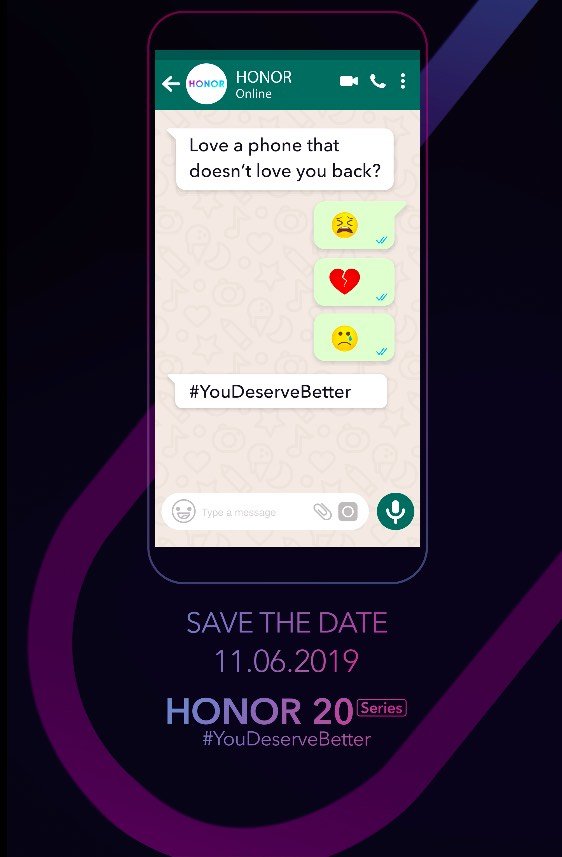 HONOR 20 Series to officially launch in London on May 21

Huawei is set to officially launch Honor 20 Series smartphones in London next month on May 21. The launch teaser comes from Honor UK twitter handle in the form of a cryptic mathematical equation which is quite easy to solve and the answer to that gives you the launch date i.e. 21st May 2019. The launch teaser includes a hashtag of #CAPTUREWONDER and includes “Series” which indicates that we will see more than one smartphones on that day.

We can safely assume that at least two smartphones i.e. Honor 20 and Honor 20 Pro will be unveiled on that day. You can safely assume that both these smartphones will be the tone down variants of Huawei P30 and Huawei P30 Pro. It may feature the flagship hardware with top of the line Huawei HiSilicon Kirin 980 SoC along with triple camera module at rear probably having sensors of 48MP + 20MP + 8MP with one of them being an ultra-wide lens. The launch teaser indicates great camera performance though no details are provided.

Honor 20 is rumoured to feature 6.1-inch display along with in-display fingerprint sensor. You can expect 6GB or 8GB of RAM along with 128GB / 256GB of internal storage running the latest version of Android i.e. Android 9.0 (Pie) based operating system.

Not much is know about the hardware specifications at the moment. Stay tuned at AndroidPure and we will keep you updated.

Redmi Note 7s to launch on 20th May in India