Samsung Android 10 Update list surfaces; here are the phones and tablets that will get the update [UPDATED]

[Update] It appears that the image that we received for Samsung Android 10 Update was from an unofficial Facebook page and is not from any official sources. We never claimed that it was an official image or a reliable source. We clearly mentioned that we received the image without any clue of the source. In Spite of that, the list appears to be accurate though you should wait for an official update.

Google announced Android 10 nearly a month ago, and a few companies like Nokia, Realme, have already announced their plans to update their devices to the new OS. 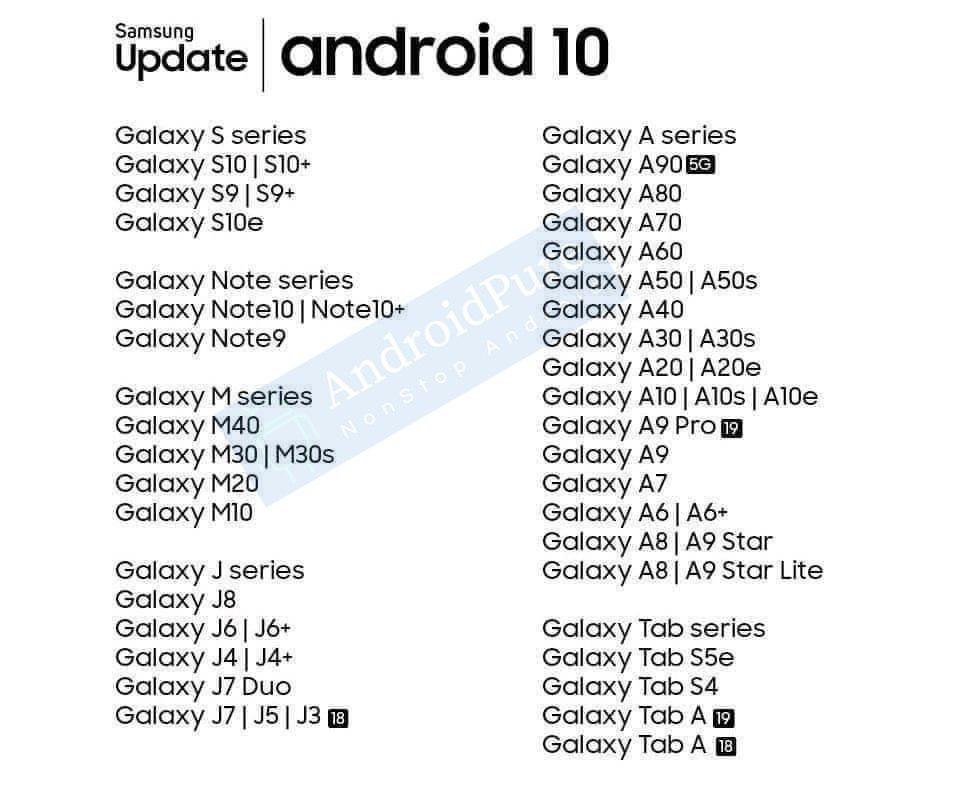 AndroidPure has received a screenshot of a Samsung Android 10 Update list. And there are quite a few devices in the list.

The Samsung Android 10 Update list includes all M series phones, and most devices launched in 2018 and 2019.

The most notable absentees in the list are the 2017 flagships, the Galaxy S8, Galaxy S8+ and Galaxy Note 8+. Is it surprising though? Samsung (and most OEMs) only offers 2 major Android Updates for most devices, including flagship phones. And those 2 years are up already.  They might still get security updates for an extra year, just like the Galaxy S7.

The Galaxy M10s is missing from the list too, but obviously the list can’t applicable for future phones (the M10s was announced yesterday).

Now, the Samsung Android 10 Update list doesn’t mention when the phones/tablets will be updated to Android 10.

But we can safely assume that the most recent flagships, i.e. the Galaxy S10, S10+, S10e, Galaxy Note10 and Note10+ will be the first to get the update. T-Mobile, for example, is already testing Android 10 for the Note10. The Galaxy S9, Note 9 series could get it next, followed by the premium A series phones, and so on.

Redmi 8A with 5000mAh battery, water drop notch display to launch on September 25th in India