Halfbrick Studios has made their game, Colossatron: Massive World Threat, free to play. 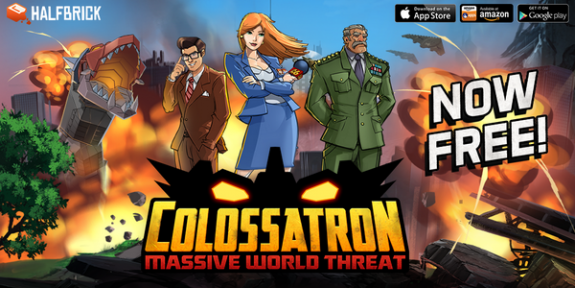 The game lets you play as the colossal snake, aptly named “Colossatron”, in a mission to destroy the World. What else did you think it was gonna do?

The gameplay is quite simple, as the snake navigates on it’s own, all you have to do, is match the Powercores (colored boxes) as they appear. Once you match the powercores, they transform into powerful weapons. There are thousands of combinations, so mix and match to your heart’s content.

Chaotic Campaign – Explode your way through seven continents on a destructive trail spanning the entire globe!
Epic Boss Fights – Throw down against giant mechs, ballistic gunships and more in a furious fight for survival!
Devastating Weaponry – Crush your enemies with a huge arsenal of powerful weapons, impressive upgrades and high-tech gadgets. There are thousands of potential combinations!
Intense Survival Challenges – Compete against friends in the ultimate test of skill and strategy.

ALSO READ:  Gameloft Classics 20 Years with retro games released for free
The app was not found in the store. :-(
Go to store Google websearch

We are not sure why they dropped the price tag to free, but at least now there is no reason not to get the game now.