The roadmap of the beta version of Android 12 Update for iQOO phones has been officially revealed. The Vivo-owned brand took to its Twitter account, to outline its plans regarding the upcoming software upgrade. Check if your phone is among the list. 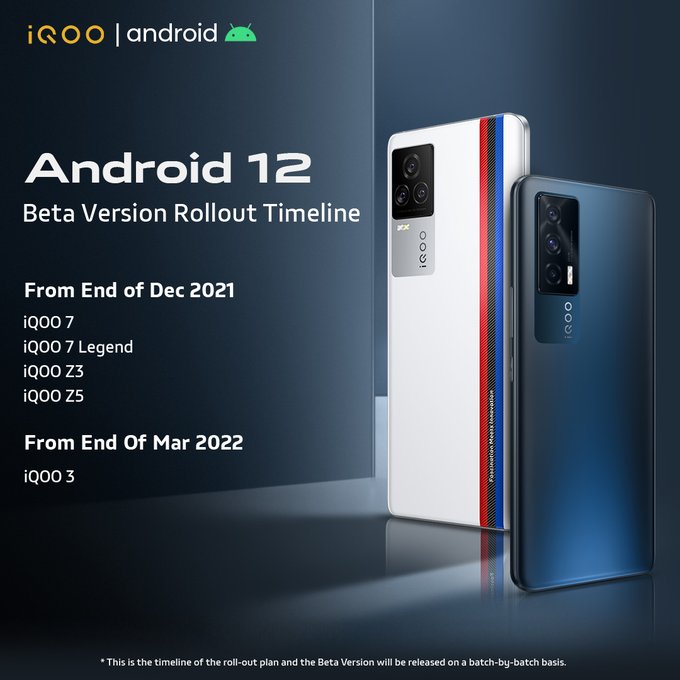 iQOO will kick off the beta test by rolling out the Android 12 update for the iQOO 7, iQOO 7 Legend, iQOO Z3 and iQOO Z5 from the end of December 2021. The iQOO 3 will receive the Android 12 beta update at the end of March 2022.

That is basically the entire portfolio of devices from the company. The firmware will be released to users in batches, during the testing phase. It will then be rolled out to all users, once the company has sorted out bugs in the software.

While the roadmap includes the iQOO 3, the company provided a rather confusing answer in response to queries from users. It said that it had no plans about Funtouch OS for the IQOO 3. The phone had been launched with iQOO UI 1.0 based on Android 10.0. So it is possible that the device may ship with iQOO UI 3.0 instead of Funtouch OS.

While Google has already released Android 12 to its Pixel phones, other OEMs including ASUS, Vivo, OPPO, and Samsung are in the process of testing Android 12 for their devices. OnePlus and Xiaomi are also expected to make the OS available for their handsets soon.