Redmi’s next device launch is sooner than you think. The company has announced the Redmi 7 launch date. 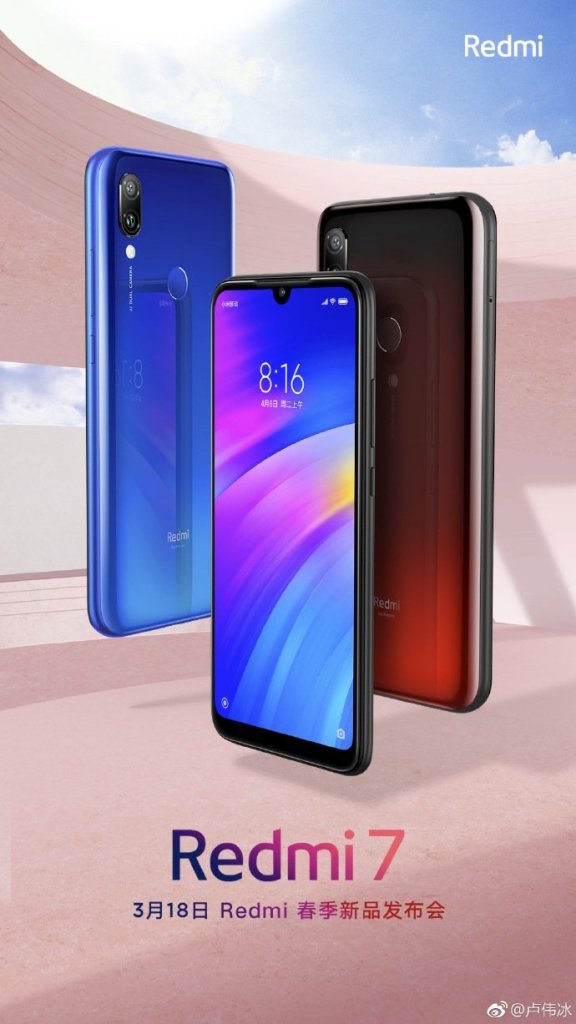 The news comes from the General Manager of Redmi, Lu Weibing, who shared the above teaser image on his official Weibo account. And yes, the photo does reveal the device itself ahead of the announcement.

The Redmi 7 launch date is set for March 18th, in China. The complete tech specs of the device was leaked in a hands on video and also on TENAA. Here’s a recap of the phone’s hardware.

The device has a rear placed fingerprint scanner, and supports Face Unlock via a selfie camera, that is housed in the water-drop notch. The Redmi 7 sports a 6.26-inch HD+ display, runs on Xiaomi’s MIUI 10 with Android Pie, and is powered by a Qualcomm Snapdragon 632 processor with 2GB/3GB/4GB of RAM.

The phone has 16GB/32GB/64GB of storage, and has a microSD card in the Hybrid SIM tray. The Redmi 7 is backed by a 4,000 mAh battery. The good news is that it has a 3.5mm headphone jack, but doesn’t have a USB Type-C port. Instead it is equipped with a micro USB port.

The Redmi 7 features dual rear cameras with a 12MP lens and an 8MP lens.

The Redmi 7 launch date is a week away, and we think that the Redmi Note 7 Pro may be announced for China, on the same stage.