The Oppo F9 Pro India launch date has been set for August 21st. The company has officially announced the news via a press invite shared on social networks. 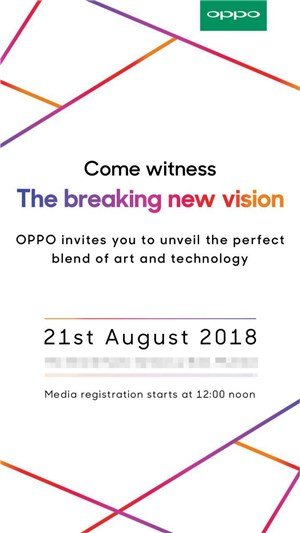 But, we already know what the phone looks like thanks to the official teaser from the company.

The Oppo F9 Pro has a notch display design, which the company refers to as Waterdrop screen. That’s what the tagline “the breaking new vision” actually means, even though it sounds really weird. The name kinda fits though, given that the notch is sort of like a drop of water, and only houses the selfie lens. This should give the phone a massive screen to body ratio, and is in fact much smaller than the notch on the Essential phone.

And you may have read about the leaked Oppo F9 technical specifications, which we reported exclusively. The phone will be launched in Vietnam on August 15th. Since the company is launching the device by rebranding it as the Oppo F9 Pro, we expect it to share the spec sheet.

The phone flaunts a 6.3-inch FullHD+ Waterdrop display and runs on ColorOS 5.2 based on Android Oreo. The Oppo F9 Pro is powered by a MediaTek Helio P60 processor which supports AI features and has 4GB of RAM plus 64GB of storage.

The Oppo F9 Pro has a dedicated memory card slot, which will support up to 256GB. The device supports Dual SIM cards and is backed by a 3500 mAh battery.

In terms of photography, the Oppo F9 Pro boasts dual rear cameras with a 16MP primary lens and a 2MP secondary lens with a f/1.85 aperture. Oppo continues with its self-imposed selfie-centric trend with a 25MP front camera which has a f/2.0 aperture.

We will know for sure if the spec sheet is accurate when the Oppo F9 Pro India variant is launched on the 21st.