MIUI 11 update for Poco F1 rolls out in India

The MIUI 11 update for Poco F1 is being rolled out in India, as promised in the update roadmap. Poco India GM, Manmohan announced the news on Twitter today. 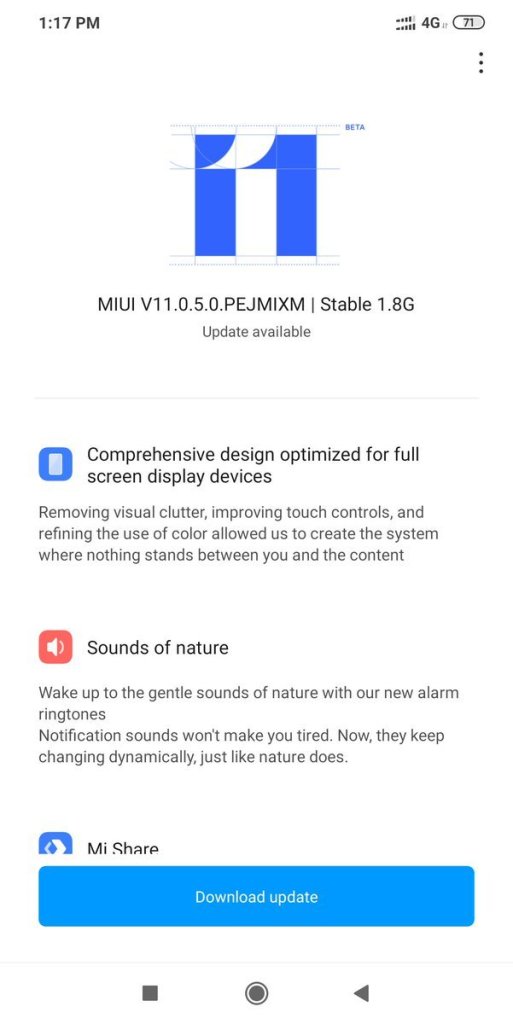 The version number of the new firmware is MIUI V11.0.5.0.PEJMIXM. It is not the Android 10 update. On the bright side, it does bring all of the MIUI 11 features which we have talked about in detail.

Here’s a brief recap of what’s new in the update.

The MIUI 11 update for Poco F1 weighs a massive 1.8GB to download. The update is being rolled out in stages and will reach all users in time. With that being said, many users have been sharing screenshots of the update on Twitter.

Some users have questioned Xiaomi, as to why there is a beta icon next to the large 11 in the notification page of the MIUI 11 update for Poco F1. But we think that it could be an error. The fact that the wording says stable is however reassuring.

The Redmi K20 has been updated to MIUI 11 already, you can check out what’s new in it from our previous coverage.

MIUI 11 update for Redmi Note 7 rolls out in India; also released for Redmi 7 and Redmi Y3