Samsung Galaxy M01 is expected to launch in India in the first week of the upcoming month i.e. June 2020. Galaxy M01 first surfaced through the Google Play Console listing last month revealing some of the specifications of the device. The listing also confirmed that Samsung Galaxy M01 will be an entry-level smartphone with decent hardware and will be priced accordingly.

Ahead of the official launch of the device, Samsung Galaxy M01 specs have leaked revealing all the details of the device. The leaked specifications of the device match with the earlier Google Play Listing. Samsung is expected to launch Galaxy M11 along with this entry-level smartphone. 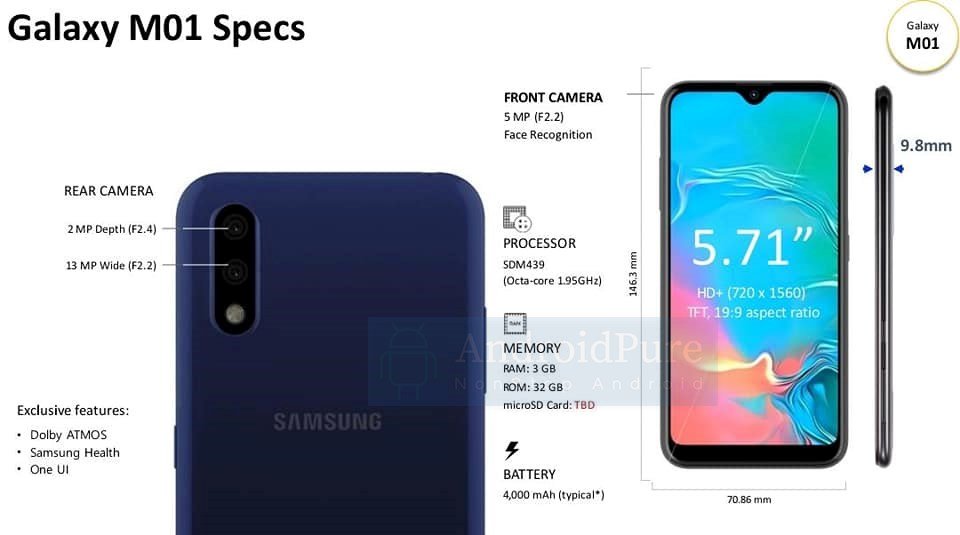 The poster above indicates that Samsung Galaxy M01 sports a 5.71-inch HD+ (720 x 1560 pixel resolution) TFT Infinity V-display having 19:9 aspect ratio having a waterdrop notch at the top. The phone is powered by 1.95GHz octa-core Qualcomm Snapdragon 439 processor along with 3GB RAM. It comes with 32Gb internal storage and runs on Samsung One UI.

It is backed by a 4,000mAh battery along with fast charging support. In terms of dimensions, it measures 146.3mm x 70.86mm x 9.8mm. Other features include Dolby Atmos and Samsung Health support.

In terms of pricing, tipster Ishan indicates that Galaxy M01 with 3GB RAM and 32GB internal storage will be priced at Rs. 8,999.

The company is yet to announce the official launch date for the device. Stay tuned at AndroidPure and We will keep you updated.

Honor Play 4 to be launched on June 3rd in China; specs listed on TENAA