Realme is prepping for a new device launch, this time with the Narzo series. The Realme Narzo 20 series will be launched next week. 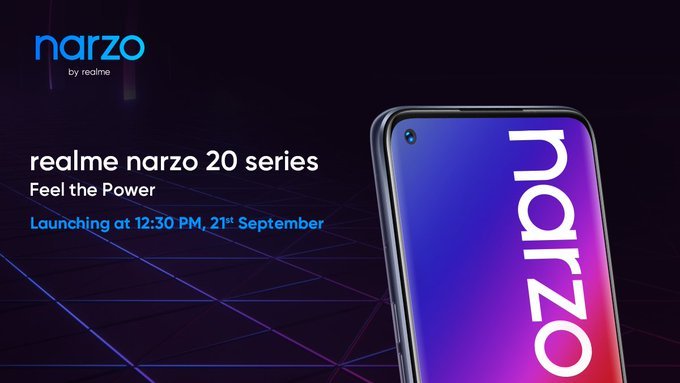 The brand has posted a teaser for the upcoming phones, and it appears that it is deviating from the notch design. Instead, the Realme Narzo 20 will sport a punch-hole display with the selfie-lens placed in the top left corner of the screen.

The bezels look fairly slim on the phone, but we can’t say that for sure until the entire design has been confirmed. The new series will be launched as a Flipkart exclusive, just like the original series.

Realme had debuted the series with 2 phones: Narzo 10 and Narzo 10A. But a Tweet by the brand’s CEO, Madhav Sheth, suggests that Realme Narzo 20 series will have 3 phones: Narzo 20A, Narzo 20, and the Narzo 20 Pro. Going by the specs and price tag of the previous generation phones, we can expect the Narzo 20A to be the lower-end of the three phones, and obviously that means the Pro variant will be the higher end device.

The Realme Narzo 20 series will be announced on September 21st in India. The event will be streamed live at 12:30 PM via social channels.