by Avinash Kumar
in Apps

Even though number of dictionary apps are available for the Android Smartphones and Gadgets, most of them apart from being supported by loads of Ads need a internet access and cant be used offline. QuickDic for Android is one good exception to this.  It is a offline multilingual translation dictionary which simply means that you can use it without any internet connection and it is free from Ads.

It is not developed by any company and is Open source. It uses data from en.wiktionary.org and Beolingus to generate dictionaries that can be used offline by storing that data right on your Phone’s SD Card or Memory. It is a multilingual dictionary and supports translation of words from English to loads of other languages and vice versa.

Honestly, I have never seen such a wide range of multilingual support for any dictionary. At the moment, it  has built-in dictionaries from English to:

YouTube for Android now has Offline Playback in India, Indonesia and Philippines 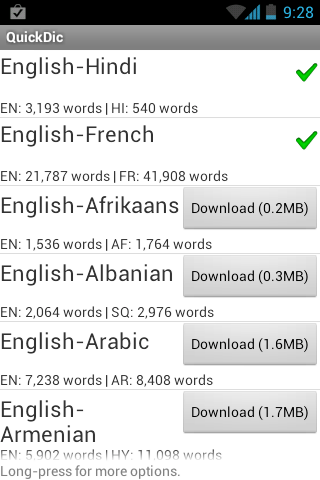 GRAPHICAL USER INTERFACE AND USE

The GUI of the app may look odd initially. When you run this app first time, you will get a screen to download dictionaries. Just download any language you wish to learn. You must download at least one language in addition to English (already there with the App) to start using the app.  Just click on the download button of any of the languages and it will start downloading. After that just tap that and you will get the actual interface. 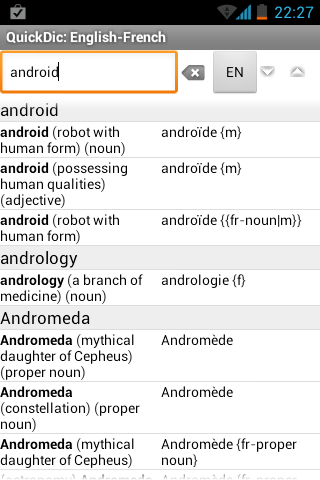 Its basically a two column interface which will show each word you search for in two different languages. Just type the word and it will give you the meaning and its equivalent in the other language.

The best thing, you can just flip the two languages e.g you can change the dictionary languages from say English >> French to French >> English just by clicking on one of the buttons.

MAKE YOUR OWN CUSTOM DICTIONARY

You can create your own custom dictionaries for offline use, using data sources such as dict.cc (whose copyright prevents distribution along with the dictionary). If you want to do that, checkout the instructions for building a custom dictionary.

The number of words in each language can be limited and not exhaustive. You should not expect it to have exhaustive dictionary app with almost every word of the languages you are using in the app.

Also, I was unable to use it unless one language other than English was downloaded. There is no option of English >> English or in other words, it doesn’t have Thesaurus support.