Xiaomi has launched the Mi TV Stick in India. The smart streaming device was announced in Europe a month ago. 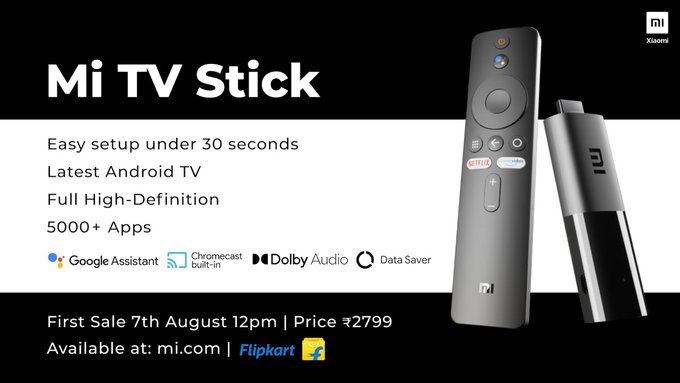 The streaming device is powered by a Quad-core Amlogic S905 Y2 processor, with an ARM Mali-450 GPU, 1GB of RAM, and has 8GB of storage. It comes with a HDMI port, and a micro USB port.

In terms of connectivity, the Mi TV Stick supports dual-band Wi-Fi and Bluetooth 4.2. It is compatible with Dolby, DTS Surround Sound audio. The remote that comes with it supports Google Assistant voice controls, and has dedicated buttons for Amazon Prime Video and Netflix.

The Mi TV Stick has been priced at Rs. 2,799 in India. It could be a temporary discount, since a banner on the Xiaomi India website shows a struck out price of Rs. 3,499. It will compete with the Amazon Fire Stick that retails for Rs. 3,999 in India.

It will go on sale at 12PM on August 7th at Flipkart and Mi.com online stores.