Halfbrick Studios has updated its iconic game, Jetpack Joyride, with a Halloween theme, which brings in quite a bit of extra stuff, to the endless runner/flyer. The update lets you play in the holiday event, which can be accessed from the main menu.

The background graphics of the game now features lots of jack-o-lanterns, coin packs which are shaped like a bat, or spell Halloween related words.

More importantly, there are flying tokens (flying jack-o-lanterns), which appear throughout the game. Collecting these will unlock various rewards, which include costumes and a cool looking skin for the lovable dragon we know as Mr. Cuddles. The fire breathing lizard now sports a skeletal look, with the new Bone Dragon skin. Though it does remind me of  the Skeletal Dragon, which you come across during the Staff of Magnus quest line in the Labyrinthian (Elder Scrolls V: Skyrim), Cuddles is on your side, and lets Barry Streakfries ride him as a Grim Reaper.

The Bone Dragon appears whenever you use a revive (heart), even the free one which you get for viewing an ad, lets you ride the lizard. So you can use it once per level, or as long as you have quick revives. Unlocking the Bone Dragon and Grim Reaper permanently is an uphill task which require 1700 and 1000 tokens respectively.

Here is a image featuring the 7 levels of rewards in Jetpack Joyride: 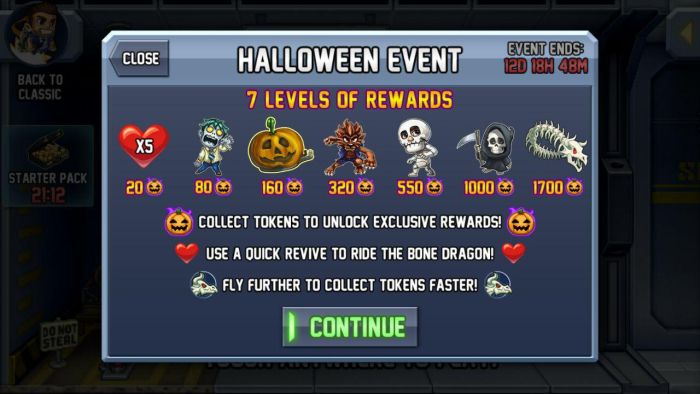 The tokens are few and sparse between the distance 0-1000 (or 1200m). So, you have to ensure Barry survives that distance, after which the tokens appear more frequently with almost one or two ever 50-100m or so. Depending on how skilled you are at the game, you can get 20-30 tokens per run easily, if you can fly 5000m or more. But even then, reaching the 1K or 1.7K mark seems a far target, given that the event is a time limited  one (Event ends November 3), unless you are going to play the game for hours. Make sure to use your free revive by watching a small video ad, which will give you a chance to get more tokens.

Also, you can collect the three S.A.M tokens everyday, which is pretty useful as the giant robot ensures you won’t miss the flying tokens, but it can be only used once a day.

Once you meet the token requirement for a reward, you can unlock it from the main screen, and no you can’t save up to unlock the biggest rewards first. They are unlocked progressively via levels.

Note: The game does lag at times, perhaps due to the newly added background graphics. Hopefully it will be fixed soon.

ICYMI, Halfbrick Studios released a new game called Dan the Man, recently,which is quite fun and free to play.