Microsoft has officially released the Windows 10 ROM for the Xiaomi Mi 4. 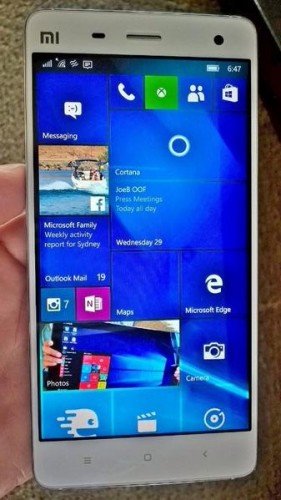 [su_note]Disclaimer: The ROM is only available for the Xiaomi Mi 4 LTE variant DO NOT try it on the Xiaomi MI4W variant which is sold outside of China (especially in India). Androidpure is not responsible for any damage you incur during the installation process, proceed at your own risk.[/su_note]

Without further ado, here is the download link for the Windows 10 ROM for the Xiaomi Mi 4 LTE.

You will need to use the MiFlashTool which you can download from the official MIUI forums.

And here is Joe Belfiore from the Windows 10 team welcoming Mi 4 users to the Window Insider Program.

Xiaomi says it will release the ROM for the Mi4W variant soon after some bugs are fixed.

Xiaomi Mi 4 and Mi Note to be updated to Android 6.0 Marshmallow soon