Xiaomi Mi 4 users, we have some terrific news coming your way. 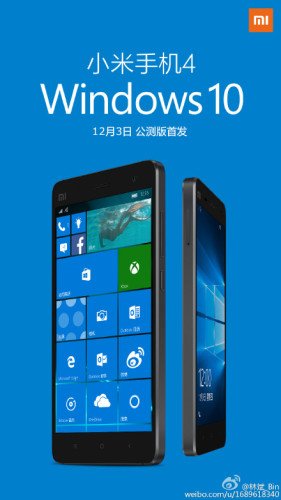 The Chinese OEM is about to release a ROM which is going to change the way you use your phone.

Yes, Microsoft and Xiaomi are going to release Windows 10 Mobile for the Xiaomi Mi 4 officially. Xiaomi’s Founder and President Lin Bin, announced the news on Weibo. We reported about the Mi4 running on the latest operating system from the Redmond company, way back in March this year. Joe Belfiore, the boss of the Windows OS team, later confirmed in July, that Xiaomi phones will get Windows 10, and that it was being tested in China.

Almost nine months later, the Xiaomi Mi 4 looks set to be the first Android device, and the first non-Windows Phone to get an official version of Windows Mobile OS.

The official Windows 10 Mobile ROM for the Xiaomi Mi 4 will be released on December 3rd.

Finally the flagship device will run on an operating system that isn’t two years old. And yes, we will be installing Windows 10 Mobile on our Mi4 too.