The Vivo Y11 will be launched soon in India. The confirmation comes from the company which told NDTV about the same. 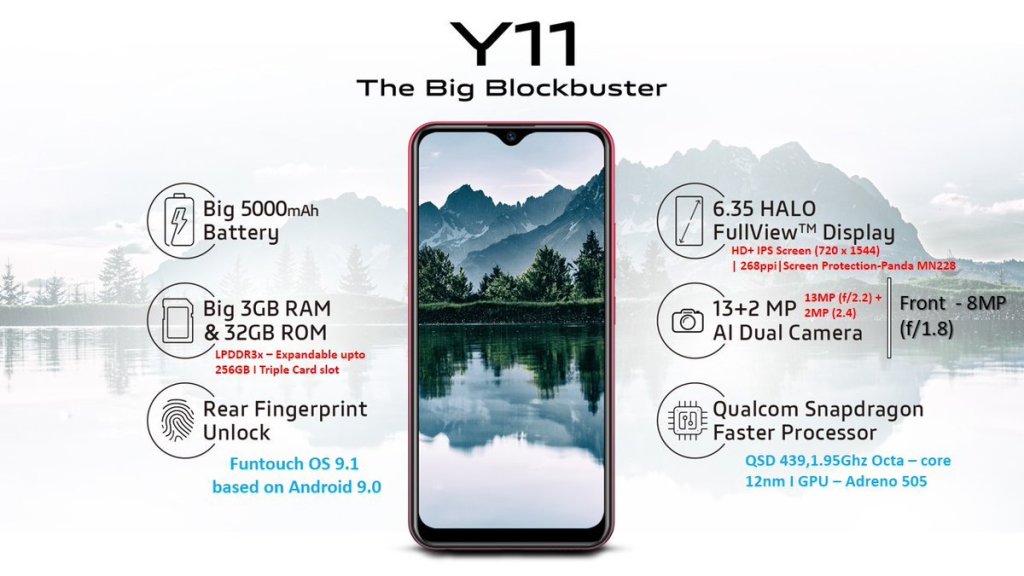 And, here are the phone’s tech specs, thanks to a poster tweeted by Mahesh Telecom.

The Vivo Y11 sports a 6.53-inches HD+ IPS display which the company terms as Halo FullView display. It has a waterdrop notch, and is protected by Panda MN228 Glass. The phone runs on Funtouch OS 9.1 based on Android 9.0 Pie, and is powered by a Qualcomm Snapdragon 439 processor with an Adreno 505 GPU, with 3GB of RAM. The Y11 has  32GB of storage and supports up to 256GB of expandabel memory via a dedicated microSD card slot that’s part of a triple card system. The device is backed by a 5000 mAh battery.

Vivo X50 series to launch on July 16th in India

According to 91Mobiles, the will Vivo Y11 price in India could be Rs. 8,990. The device will reportedly be available for purchase on December 21st, and comes in Red Coral and Green Jade colours.

Samsung Galaxy S10 Lite Specs leaked; will be powered by a Snapdragon 855 processor