Xiaomi has announced a new battery monster with the Redmi 9A in India. The budget-friendly phone supports 10W fast charging to top-up the 5,000 mAh battery. 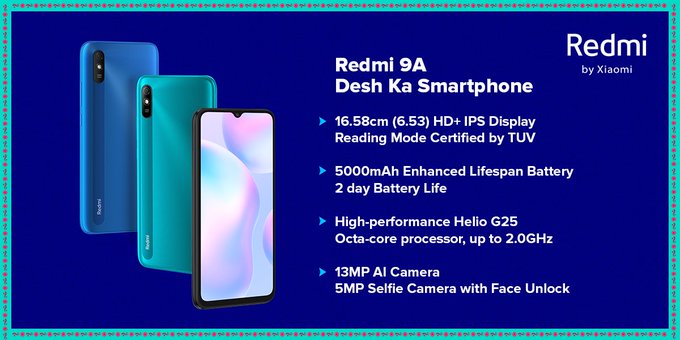 The Redmi 9A is equipped with a 6.53-inch HD+ LCD display that has a water-drop notch, and a 20:9 aspect ratio. The phone runs on MIUI 12 based on Android 10, and is powered by a MediaTek Helio G25 octa-core processor with 2GB/3GB of RAM and 32GB of internal storage. It has a microSD card slot that supports up to 512GB of additional storage.

The Redmi 9A features a micro USB port and a 3.5mm headphone jack. The phone sports a single camera on the back, and the sensor has a 13MP lens with an f/2.2 aperture, and an LED Flash. The Redmi 9A does not have a fingerprint scanner.

Redmi 9A price in India 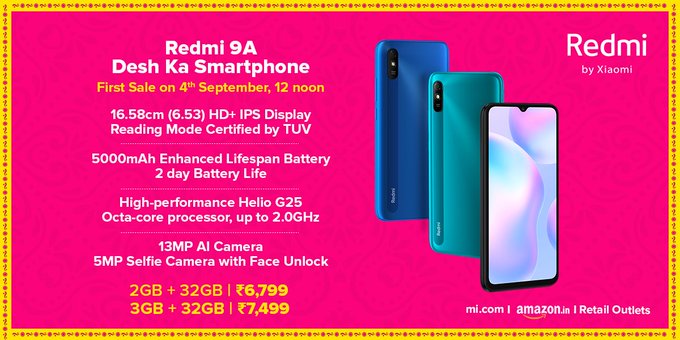 The Redmi 9A has been priced at Rs. 6,799 for the 2GB RAM/32GB variant, while the 3GB RAM model costs Rs. 7,499. It will be available in 3 colours: Nature Green, Sea Blue, and Midnight Black. The prices are slightly higher than the variant launched in Malaysia.

The phone will go on sale on 4th September on Amazon and Mi.com.