OnePlus is set to launch its next flagship on October 13th. And key OnePlus 9 RT 5G specs have been confirmed by the company ahead of the official announcement. 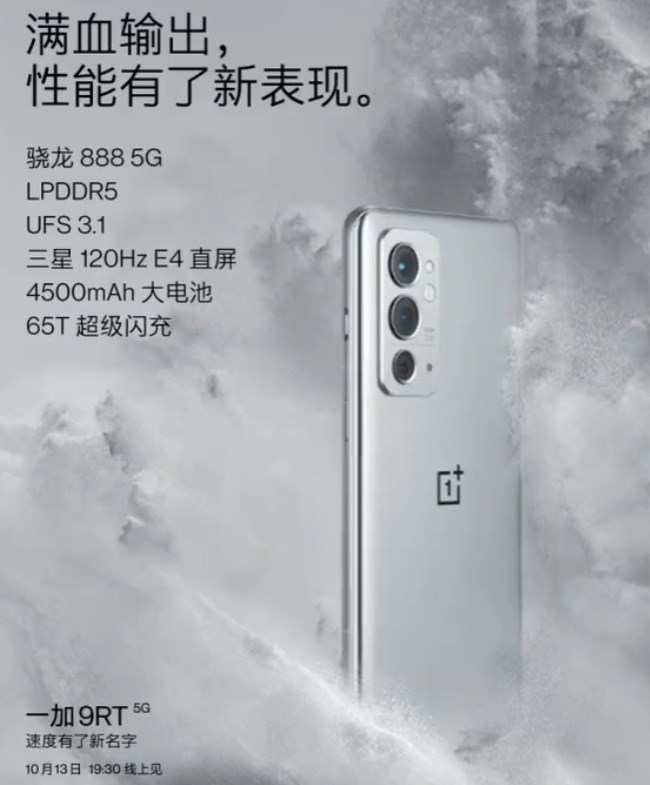 The Chinese OEM took to Weibo to share a new teaser about the upcoming phone, where it states that the device is powered by an octa-core Qualcomm Snapdragon 888 5G processor. The handset has LPDDR5 RAM, and UFS 3.1 Storage. It is backed by a 45000 mAh battery that support 65T super flash charge, aka 65W Fast Charging. Thanks to an official render, we know that the device features a 50MP camera that supports DOL-HDR.

Leaked press images of the phone confirmed that the OnePlus 9RT does not have a 3.5mm headphone jack. It retains the alert slider. The primary camera could be using a Sony IMX 766 sensor like the OnePlus 9, though it remains unclear if it has been optimized by Hasselblad. The screen is home to a hole-punch selfie camera located in the top left corner.

OnePlus may launch the 9 RT 5G in India, and rumours suggest that it could be priced lower than the OnePlus 9R. Only time can answer whether those rumours are true.

Oppo announces ColorOS 12 based on Android 12; here’s when your device will get it