Rumors that Nokia the Finnish smartphone maker may be coming back to the smartphone market soon with an Android smartphone refuses to die. We have already seen Nokia D1C on Antutu benchmarking portal revealing some of the basic specifications of the device. Antutu listing revealed that Nokia D1C sports a full HD 1080p display, powered by Octa-core Qualcomm Snapdragon 430 MSM8937 processor along with Adreno 505 GPU & 3 GB of RAM. It comes with 32 GB of internal storage and runs on Android 7.0 Nougat based operating system. In terms of camera, it sports a 13 MP main rear camera and a 8 MP front shooter for selfies. 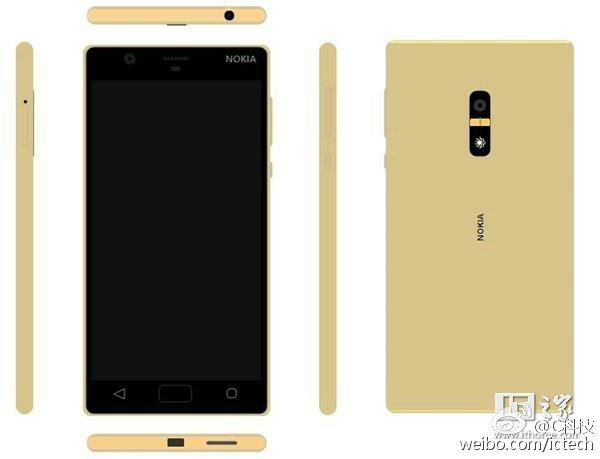 Today, we have spotted a set of new images which are the alleged renders of Nokia D1C, revealing the design and build of the device. The renders are in three colors i.e. White, Black and Gold. The render images are in powered off condition and we can only see the physical navigation button at the bottom of the front screen and camera with LED flash at the back panel. The side images reveal the location of power and volume buttons along with SIM tray.

The leak also suggests that the gold edition comes with a fingerprint sensor whereas the White and black editions do not come with fingerprint sensor. As per the rumor, it may be released sometime in next year, but no specific date.

Overall the design of Nokia D1C appears similar to earlier Lumia devices, yet we would prefer to wait for some official teasers to form an opinion on design. At the moment, there is no official word on whether or When Nokia plans to enter the smartphone market again and in which form. Stay tuned at Androidpure and we will keep you updated.

Lenovo Phab 2 Plus India launch set for November 8, to be Amazon exclusive