Nokia 8.1, a new mid-range smartphone from Nokia has surfaced on benchmarking portal Geekbench which indicate that HMD Global may be unveiling another device powered by Qualcomm Snapdragon 710 soon. The latest devices announced by Nokia include Nokia 7.1 Plus or Nokia X7 and Nokia 8.1 may be the next one in line to be unveiled officially. Nokia 7.1 Plus is also powered by Snapdragon 710 processor. 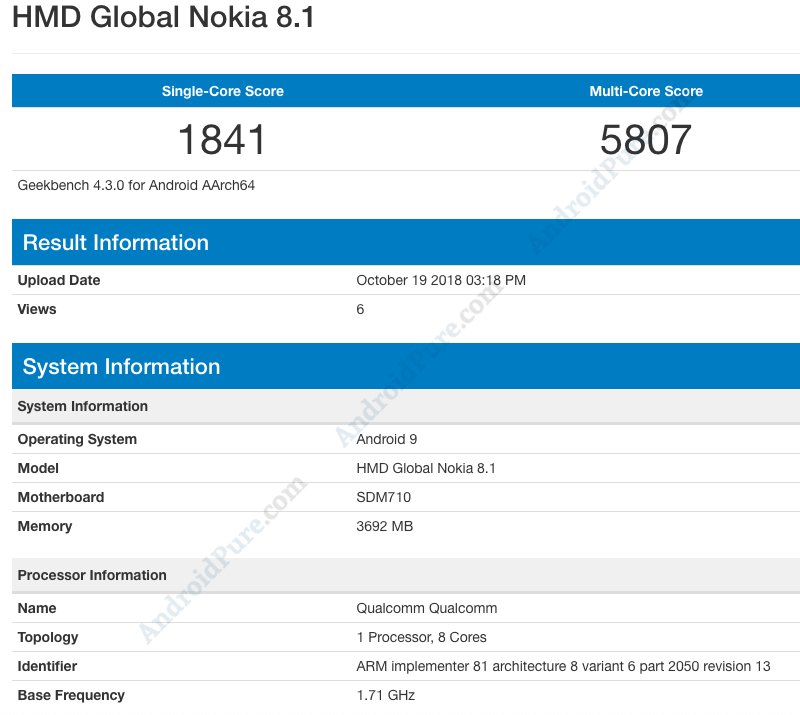 Geekbench reveals good enough details about the hardware which suggests a decent device with good performance and enough power. The single core and multi-core scores are good for a mid-range smartphone and can be used for a decent gaming device. The single core score of the device is 1841 while the multi-core core is 5807. Based on the Geekbench listing, Nokia 8.1 is powered by 1.71GHz Octa-core Qualcomm Snapdragon 710 processor along with 4GB of RAM. We can expect higher RAM variants of the device such as 6GB RAM with different storage options. The phone runs on the latest version of Android operating system i.e. Android 9 (Pie) and we expect it to be stock android as the case with most Nokia smartphones.

At the moment, there are two flagship devices in 8 series i.e. Nokia 8 and Nokia 8 Sirocco with Android One. Nokia 8.1 will be a mid-range smartphone and not a flagship device.

As with any other leak, take this with a pinch of salt. Stay tuned at AndroidPure and we will keep you updated.

OnePlus 6T to go on Sale on Nov 2nd in India

Honor Watch to be launched on October 31st in China; and we think it is the Huawei Watch GT