Nokia under HMD Global is expected to announce 6-7 smartphones in 2017 and we have already seen leaks around two devices i.e. Nokia D1C and Nokia E1. Today a new Nokia device is leaked on the web under the codename Nokia 6 and appears to be a high-end device instead of an entry-level smartphone. The leak comes in the form of image of alleged Nokia 6 smartphone render along with the specifications of the device. 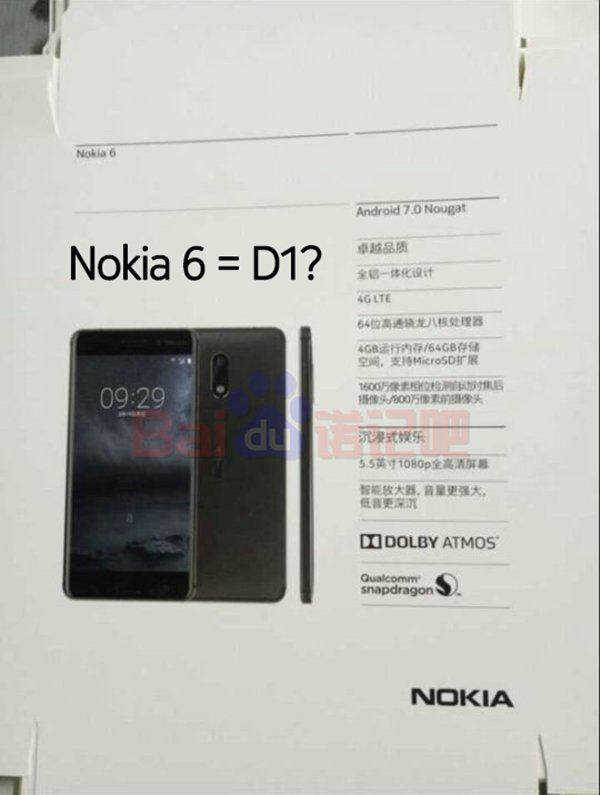 As per the leak, Nokia 6 sports a5.5 inch Full HD 1080p display and is powered by an octa-core Qualcomm Snapdragon SOC along with 4 GB of RAM. At the moment, we are not sure of which Qualcomm SOC chip is powering this device. It comes with 64 GB of internal storage along with support for expandable storage via microsd card and runs on Android 7.0 Nougat based operating system. In terms of camera, it sports a 16 MP main rear camera with PDAF support and a 8 MP front shooter for selfies. It comes with support for virtual reality and Dolby Atmos sound. It seems that Nokia 6 is just the codename of the device and final name may be something different.

Rumors indicate that Nokia E1 which is one of the leaked entry-level devices, sports a 5.5-inch display and is powered by Qualcomm’s entry-level SOC chips of Snapdragon 200 series with just 1 GB of RAM. It is rumored to run on Android 7.0 Nougat based operating system.

Whereas Nokia D1C is rumored to comes with full HD 1080p display, powered by Octa-core Qualcomm Snapdragon 430 MSM8937 processor along with 3 GB of RAM. It comes with 32 GB of internal storage running Android 7.0 Nougat based operating system. In terms of camera, it comes with a 13 MP main rear camera and a 8 MP front shooter for selfies.

As with every other leak that we report on Androidpure, take this with a pinch of salt. Stay tuned at Androidpure and we will keep you updated.