Moto E 2015 is no longer exclusive to Flipkart, now available on Snapdeal and Amazon India

Looks like Motorola is expanding its reach in India, as the Lenovo owned company has now  partnered with Snapdeal to sell its budget phone, the Moto E 2015. 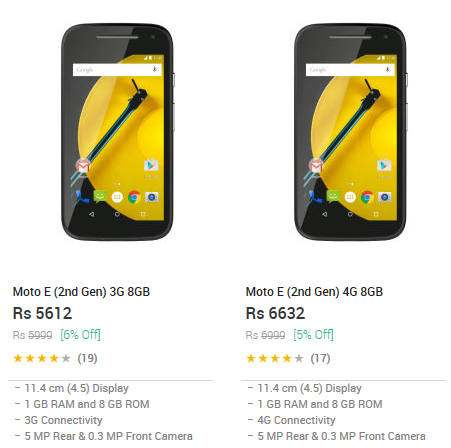 This means that the 2nd Gen Moto E, is no longer exclusive to Flipkart.

This what Motorola India tweeted out today:

Both the Moto E 2015 3G and the Moto E 2015 4G are available at Snapdeal, for Rs. 5,612 and Rs. 6,632 respectively. Those prices are about Rs. 300 cheaper than what the phones retail for Flipkart. You can choose from between two colours: Black or White, from the  listings of the phone, and there are no price differences between them.

It is unclear if other Motorola phones will also be made available on Snapdeal, but hopefully, they will be in the future.

It appears that the Moto E 2015 is also available on Amazon India as well.