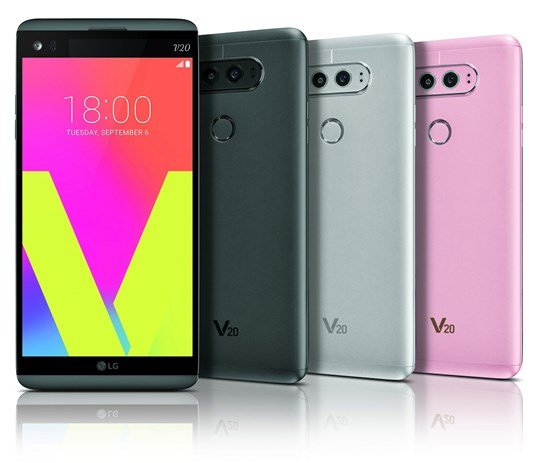 We have previously reported about the device’s technical specifications multiple times, including the dual rear cameras,  and the information matched the official spec sheet.

The LG V20 is the first phone to run Android 7.0 Nougat, and sports two displays. The primary display is a 5.7-inch Quad HD 1440p IPS Quantum display, while the secondary display (also an IPS Quantum) is of 160 x 1040 resolution. Both displays have a pixel density of 513ppi.

The secondary display is touted to be doubly brighter and has 50% larger font size than its predecessor, the LG V10’s ticker display. The V20’s secondary display also features Expandable Notifications, which can be tapped to view a long message in its entirety, and also allows the user to send a quick reply from it.

The LG V20 is powered by a 64-bit quad-core Qualcomm Snapdragon 820 processor, with 4GB of RAM. The device’s main storage is 64GB and it also comes with a microSD card slot which supports up to 2TB of expandable memory.

The LG V20 features dual rear cameras, a 16 megapixel lens with an f/1.8 aperture and Optical Image Stabilization, and the other is an 8 megapixel wide angle lens with an f/2.4 aperture. They are accompanied by a dual LED flash. The phone offers Hybrid AutoFocus using the laser auto focus,  PDAF (Phase detection Auto Focus) and Contrast Autofocusfor sharper photos.

The front camera on the V20 is a 5 megapixel shooter with a wide angle lens and an f/1.9 aperture.

LG has skipped the modular design for a removable battery, which is of 3200mAh in capacity, and supports Quick Charge 3.0. The phone has a metal design comprised of light wieght aluminum and Silicone Polycarbonate (for the top and bottom). LG continues to favour a rear placed fingerprint scanner, with the LG V20 following in the footsteps of the Nexus 5X and the LG G5.

The LG V20 will be available in Korea from this month. The company states it will announce the launch dates for other markets in a few weeks.