Google has silently introduced Google Play Carrier Billing in India. You can now buy apps, games, books and movies and pay for them with your mobile phone service provider’s bill.

But there is a bit of bad news too.

It appears that this feature is exclusive to Idea mobile subscribers, who have a post paid plan. That is what the comments suggest on Reddit, which is a bit disappointing. 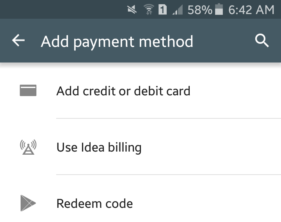 This is perhaps a trial run, and hopefully they will roll out Google Play Carrier Billing for Airtel, Vodafone etc, and especially for the more common user base, which is without a doubt, users with pre paid plans. Considering the fact that most Verified by Visa debit cards, and similar ones, are not supported for International Payments, the introduction of Carrier Billing will help users buy their favorite apps and games from the Play Store, and also reduce the piracy issue which runs rampant in the Android eco system.

IDEA’s Press Release says that the billing service is also available for prepaid users. Also, it appears that a nominal convenience charge will be included for the transaction.

Xiaomi Mi Max will have a 4500mAh battery, a new leak reveals