The ASUS ROG Phone 3 has been spotted on AnTuTu Benchmark. And the result reveals some key specs of the upcoming gaming phone. 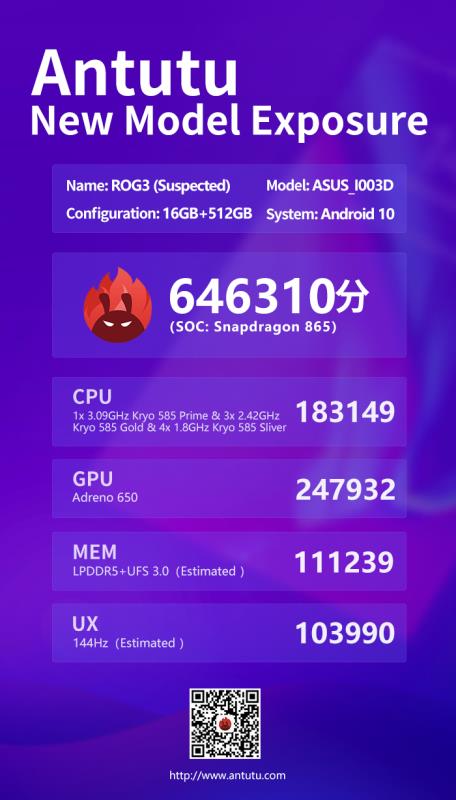 The device has the model number ASUS_I003D. It runs on Android 10. The ASUS ROG Phone 3 specs sheet tells us that the phone has 16GB of LPDDR5 RAM and 512GB of UFS 3.0 storage. That’s quite some high end hardware, and is likely to be the top variant of the phone.

According to the benchmark result, the device clocked a score of 646,310 points on AnTuTu. The ASUS ROG Phone 3 specs revealed in the result indicates that the phone is powered by a Qualcomm Snapdragon 865 processor that scored 183,149 points. The GPU managed to net 247,932 points, the memory a 111,239 points, and the display scored 103,990 points.

The result from AnTuTu throws light on the CPU’s specs. The Snapdragon 865 on the ROG Phone 3 has a frequency of 3.09 GHz for the Kryo 585 Prime core, while the three Kryo 585 Gold cores are clocked at 2.42GHz, and the other four cores, the Kryo 585 Silver are tuned at 1.8GHz. The display on the ROG Phone 3 reportedly has a 144Hz refresh rate. These ASUS ROG Phone 3 specs line-up with the TENAA listing which we reported about a week ago.

ASUS has confirmed that the ROG Phone 3 will be launched in July in China.