After numerous leaks around Xiaomi Mi 5S, we now have an official confirmation from the company in the form of a launch date teaser for the event. Xiaomi has just released an official teaser of Weibo which comes with a big “S” indicating the new Xiaomi Mi 5S smartphone and “2016.9.27”  which basically indicates the 27 September date, on which the launch event will happen. The event is scheduled for September 27 at the Beijing National Convention Center in China. 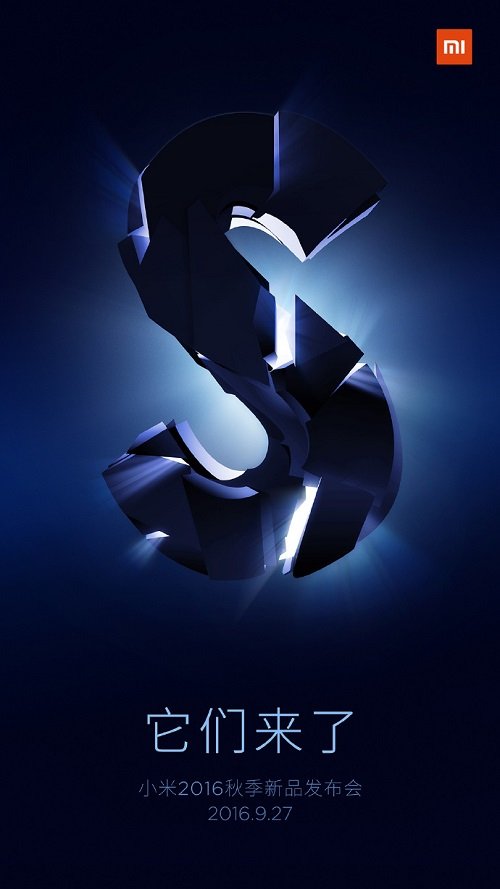 The teaser doesn’t come with any other information about the smartphone, but recent leaks already revealed the full hardware specifications of the Xiaomi Mi 5S. As per the leak, Xiaomi Mi 5S sports a 5.15 inch display with 3D touch support, powered by 2.4 GHz Qualcomm Snapdragon 821 Processor  along with Adreno 530 GPU and 6 GB of RAM. It comes with 256 GB of UFS 2.0 internal storage. A lower variant with 3 GB /4 GB of RAM is also indicated by earlier leaks.

In terms of connectivity, it is a dual SIM device with nano sim cards and comes with support for 4G/3G/2G, WiFi & Bluetooth. It also comes with NFC support.  It is backed by  battery of 3490 mAh (typ) / 3410 mAh (min) capacity along with Qualcomm fast charge 3.0 support. It uses a USB C type port instead of micro-USB port.

OnePlus One and OnePlus X will not get VoLTE support, blames Qualcomm

Evan Blass: Allo will be released on September 21st