OnePlus 5 is set to announce globally on June 20, followed by the local launch in countries such as India (on June 22). Even though we are still almost two weeks away from the official launch, the rumour mills are churning fast revealing more information about the upcoming flagship device.

Today, OnePlus 5 with model number A5000 is spotted on the benchmarking portal Geekbench revealing a 8 GB RAM variant of the flagship device. As per the Geekbench listing, OnePlus 5 is powered by an octa-core Qualcomm Snapdragon 835 MSM8998 processor clocked at 1.9 GHz along with 8 GB of RAM. The phone runs on Android 7.1.1 Nougat based operating system. In terms of benchmark scores, it scores 1917 under single-core, while it scores 6562 under multi-core. 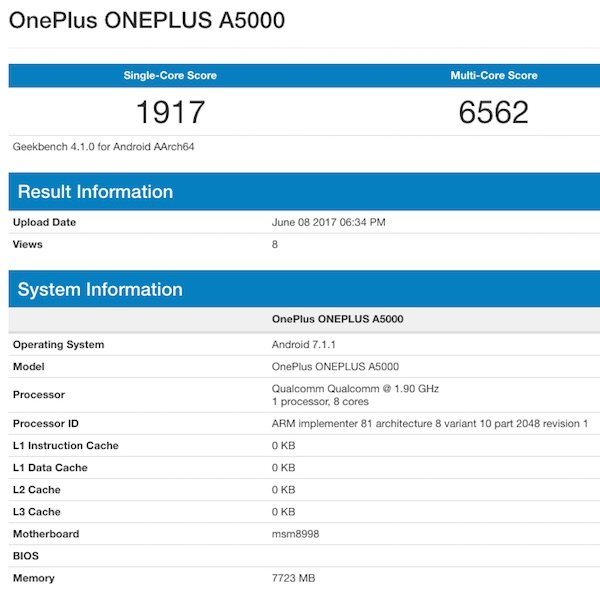 We have already encountered rumours of the 8 GB RAM variant from @evleaks who spotted the device in Amazon India launch page source code, which was later removed from the site.

Based on rumours, OnePlus 5 is expected to feature a dual edge full HD 1080p display, but smaller than the existing OnePlus 3T, powered by Qualcomm Snapdragon 835 processor along with 6 GB / 8 GB of RAM and 128 GB internal storage.In terms of camera, it is expected to come with a 23 MP rear-facing camera and another 16 MP front shooter for selfies. Rumours about the battery indicate a 3300 mAh battery with improved dash charging.

We have already seen the first official image of OnePlus 5, confirming the dual camera setup at back aligned horizontally just like the Apple iPhone 7 Plus and upcoming Oppo R11.

Here is OnePlus 5 first official look, with Horizontal Dual camera like iPhone 7 Plus